Moving from Toronto to Quebec 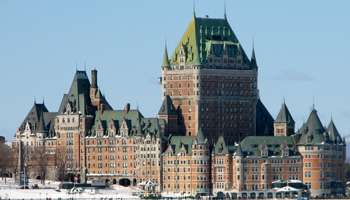 Moving from Toronto to Quebec may not seem like a very long distance – after all, it’s much closer than Vancouver or Calgary. But it’s still about 800 kilometres, which isn’t a short distance by most standards. However, as the second most populous province in Canada, Quebec is a common destination for families and individuals moving from Toronto for work, family or just to better enjoy the great outdoors. It’s no coincidence that the experienced team at Phillips Moving & Storage has been relocating households from the GTA to Quebec for many decades. You can rely on us to make your move go smoothly and worry-free.

If you’re moving to Quebec, you’re likely going to be living in the Greater Montreal Area, which is where half of the province’s population resides. As you probably know, the biggest differences from living in Toronto will be that French is the predominantly spoken language and that the winters can be quite harsh. Despite those changes, the province and its cities have a rich history dating back to the 1700’s, and you’re sure to find many points of interest in the history, culture, fine arts and lively ambiance of this beautiful place.

Call Phillips Moving for your move to Quebec

We’re not shy about telling you that we are one of Canada’s oldest family-owned, full-service moving companies. That means we have more experience and expertise in residential and commercial relocation than pretty much anyone else you’ll talk to. We have all the right equipment, moving trucks, boxes, dollies, and most importantly, the most capable team you can find to move you from Toronto to Quebec. Call us today and you’ll see why so many families have been trusting Phillips Moving for generations.

Today's crew were great. They were really good with handling all the antiques. Thanks!

We would like to thank you for making the preliminary move of our furniture today. Everything went smoothly and we were impressed with the knowhow of the two representatives from your company, namely Don and Delroy. They were both polite and expedient. They even provided us with some extra garment boxes so that we could start packing for the later big move.

My move went very smoothly all round. Claude and his team of packers and movers ran a well coordinated and smooth operation from start to finish.

It would be remiss of me to just send a cheque without a huge THANK YOU for the manner “Phillips” managed our office relocation. At our first meeting your consultant, with a calm, professional manner, looked through the office, estimated how many boxes would be needed, how many men and how many hours would be needed to work to ensure a quick and well-done move. On the actual day of the move, although everyone certainly worked hard, I never saw him stop moving or even slow down. He assigned work loads and took more than his share of the load. Please pass on our thanks to this very nice young man.